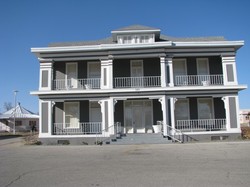 ​The Volunteer Services Council's goal is to provide goods and services to enhance the quality of life for the individuals living at the San Angelo State Supported Living Center.

The VSC is comprised of volunteers of the community that care about people with Intellectual and Mental Disabilities. The VSC is a small, but mighty group working to bring awareness to the mission and fundraise to support the mission.

San Angelo State Supported Living Center History
While the San Angelo SSLC was opened in 1969, the original land and buildings began their roots in Texas history on
​July 04, 1912 as a State Sanatorium. This facility was created by the Senate in 1909 to rehabilitate Texans suffering from Tuberculosis. The facility began with 330 acres and four buildings. Attracting employees was difficult due to low wages, geographic isolation, and the fear of contracting TB. In 1915, The Sanatorium School for Nursing was created at the facility to train the needed staff.  By the time the school closed in 1961, 501 nurses had graduated. These nurses treated more than 13,000 individuals, the facility expanded to thirty-five buildings which included a surgical facility, and was re-named the McKnight State Tuberculosis Hospital by the Texas Legislature. This name change was meant to honor the Joseph B. McKnight, a man who had long championed for the facility’s expansions and worked tirelessly to as superintendent for more than thirty-seven years.  As medical techniques and new drugs were developed, need for the hospital declined. The original facility is credited with treating approximately 50,000 adults and 5,000 juveniles who suffered from tuberculosis. The McKnight State Tuberculosis Hospital was converted to the San Angelo State School, which is now known as San Angelo State Supported Living Center.

Today
The campus has grown to approximately 1,000 acres of land in Carlsbad, Texas. San Angelo SSLC, with its historical homes and well-tended grounds, is an integral part of rural Tom Green County, a comfortable country-like setting that is pleasing to visitors and residents alike. This is home to about 185 adults and children with intellectual disabilities (IQ of 70 and below), coupled with mental and/or physical disabilities.  San Angelo State Supported Living Center provides a full array of psychological, medical, rehabilitative, instructional and recreational services. It is under the auspices of the Texas Department of Health and Human Services. Currently, San Angelo SSLC is listed as one of the top 10 employers of Tom Green County with an annual budget of approximately $22 million.

The VSC does not receive funds from the state of Texas or any government agency. The VSC exists on donations from the public and on grants.